Kehillat Kodesh v’Hol in Holon, Gets a Plot of Land

We are happy to announce that Kehillat Kodesh v’Hol – our congregation in the city of Holon, Israel has finally received an allocation of land from the city council, after a 7 year struggle!

The city of Holon, just outside of Tel-Aviv, is the 10th largest city in Israel with approximately 200,000 residents. Although the Reform congregation in Holon was established over 10 years ago, it has not had a permanent location, and has moved from place to place around the city – even holding services in private yards or outdoor parks.

Seven years ago, Kehillat Kodesh V’chol applied to the Holon municipality’s allocation process in order to receive land for building a community center, like many others do. 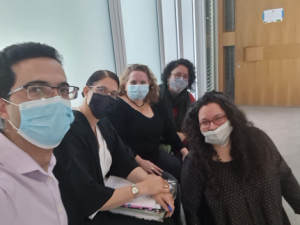 Following various obstacles related to municipal leadership, the congregation submitted a petition (with the support of IMPJ’s legal department, IRAC) which forced the City Council to hold a vote on allocating land to a Reform congregation.  Following loud and boisterous protest and opposition by the Orthodox and Ultra-Orthodox City Council members, we won the vote by one vote!

Our congregation in Holon still has a long road ahead before it can enter its new home. However, this marks another triumph of the Israel Movement for Reform and Progressive Judaism in allowing access to liberal, egalitarian, and pluralistic Jewish life across Israel.

Brothers from Another Mother…

You Just Had To Be There…

Do You See What I See?